In today’s time and age we are a bunch of technology junkies and we constantly try to get answers from the internet, Facebook and social media. So that’s exactly where I started to search for the right answer to a very difficult question that I’ve asked myself a couple of times in the past: Is the Bonsmara cow indeed the most efficient cow to breed with, are there some concrete facts to back this decision or are we as Bonsmara breeders just arrogant by saying it is the most efficient breed?

So I started out by Googling: What exactly defines the most efficient cow? The answer that I got from Dr. Google: Beef cow efficiency is defined as the ratio of output (kilograms of calf weaned) to input (the amount of feed eaten).

So practically what that means is that the most efficient cow herd is determined by the number of calves and the weight of calves weaned, these in turn are influenced by the pregnancy rate of the herd, the calf survival rate to weaning, the milk production of the herd and the calf’s growth potential. The major input driving these characteristics of an efficient cow is feed. So it makes sense to say that the cow herd that can effectively convert the least feed into the most kilograms of calves is the most effective cow herd.

Taking in mind what the definition of an efficient cow is, brings me to the point that I realised that a cow herd in Namibia, under our extensive farming environment and conditions, cannot be an efficient cow herd if it is not functionally efficient.

Functional efficiency in cattle means animals that are capable of producing and reproducing from the veld, with the minimum effort, input cost and physical day to day work.

Still I ask myself: Is the Bonsmara cow the most effective cow to farm with?

Let’s look at a few characteristics of a Bonsmara cow:

Keeping the definition of an effective cow in mind and all the characteristics that a Bonsmara cow has, can we say that it is the most effective cow to breed with? 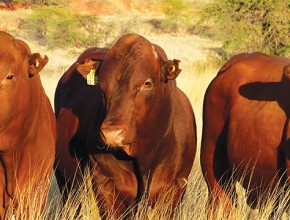 To buy a bull that is not performance tested and not registered is like gambling with your future. Learn more about choosing the right bull for your stud.

back to all articles